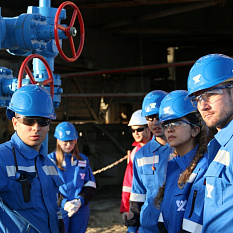 The Tyumen Region stands as the leader of the Russian fuel and energy complex. This is where you can find answers to many questions somehow related to the industry: what crude oil is, how oil and gas stocks are discovered, extracted and processed into useful products, etc.

Last week, the foreign students, taking part in the UT Summer School “STEP in Russian Energy”, had a chance to visit a number of leading companies, operating in the region, specializing in oil and gas exploration, production and processing.

At the invitation of the company "Salym Petroleum Development", the guys spent a whole day on a real field in the Khanty-Mansiisk autonomous district-Yugra having joined a huge team of professionals.

As part of the visit, they were able to test the water quality in the local chemistry lab. As a next step they were shown around the oil treatment plants and the rig site. And there was certainly much more to the program that allowed the students to get the real feel of the oilmen’s life.

"For students studying oil and gas industry, it was a great hands-on opportunity to observe the stages of the industrial production of oil and gas. Seeing the process as a whole and visiting a real oilfield definitely makes the most valuable experience."- says Pavel Kuznetsov, the head of the Summer School.

Enssar Soussy Tamly, a student at the University Colorado School of Mines (USA) shared his opinion on the program: "The trip to SIBUR was very impressive. Compared with other gas processing facilities, which I visited in the past, this enterprise seems first-class. I saw the impressive workings of the Russian engineering thought. It’s beyond praise how well their huge territory in organized, and what an enormous number of staff works there. The propylene production plant was quite impressive as well. They uphold a particularly high level of environmental and safety standards there." As part of the Summer School activities, the students have also visited other oil and gas companies.

Thus, at "Halliburton" and KCA "Deutag Drilling" they learned about conducting exploration works and drilling of wells. The Training Center of the Schlumberger company – by the way, it has only two analogs in the world – helped to demonstrate these processes in the practical context.

Representatives of “GMS Neftemash” JSC – one of the largest and most dynamically developing Russian enterprises and a UT partner – told the students about the specifics of the production of modular oil and gas equipment. At the premises of "Bentec Drilling and Oilfield Systems" Ltd. – a branch of one of the world's most important companies – the group was introduced to the production of drilling rigs and oil and gas equipment.

During their visit to the Museum of "Surgutneftegas" JSC the processes of oil and gas processing were examined in-depth with the help of interactive technologies. The group learned that "oil is not only dirty, but can also be used for cleaning", that the place where oil production takes place is called a "group of wells" and so on.

In addition, the students found out that the company "NOVATEK", the second largest gas producer in Russia, is engaged in the exploration, production, refining and marketing of natural gas and liquid hydrocarbons, whereas "SIBUR Tobolsk" LLC processes associated gas and obtains polymeric materials that are in high demand in the manufacture of cars, furniture, clothing, etc., and Antipinsky oil refinery is the only industrial refinery in the Urals, whose processing capacity exceeds 9 million tons per year.

"Thanks to the opportunity provided by the Job Shadowing Day project, the students were able to apply the knowledge acquired at Summer School classes in practice - Pavel Kuznetsov explained. – The participants were sent to a number of companies, where they became "shadows" of their mentors, following them throughout the day, watching all kinds of processes and activities that may occur and usually take place. The "shadow" asks all sorts of questions and is involved in everything happening, while also getting acquainted with all the other representatives of the company."

More photos can be found here